This statue of Wellington is very well-known in Glasgow, as it stands in front of one of the city's most important buildings and can be easily seen from several different viewpoints. The Duke Of Wellington (1769-1852) fought in India (1799-1803) and in the Peninsular War (1808-1814). But he is remembered mostly for his defeat of Napoleon at The Battle Of Waterloo in 1815. His real name was Arthur Wellesley, and he was made a Duke in 1814. He was also the Prime Minister from 1828-30.
He was known as "The Iron Duke", and when he died was given the most tremendous state funeral which had ever been seen in Britain. This statue of the Duke was made by Baron Carlo Marochetti, RA and was erected in 1844. Around the plinth are bas-relief panels which depict famous battle scenes from Assaye and Waterloo.

This view of Wellington has become very familiar - it is part of Glasgow legend that he wears a traffic cone on his head most evenings... 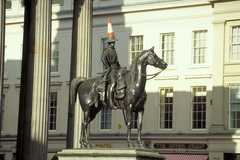