Trafalgar Square was designed in the 1840's on the site of the then Kings's Mews. Central to the square is Nelsons Column, paid for by the Nelson Memorial Committee, it stands 170 foot high.

Lord Nelson was the admiral of the British fleet at the Battle of Trafalgar in 1805. Nelson thwarted Napoleon's plans to invade England and destroyed the French naval power, ensuring the dominance of the British navy.

The north side of the square is home to the National Gallery. The Gallery was built between 1832-1838 drawing inspiration from Wilkin's previous work on the newly instated University College London. 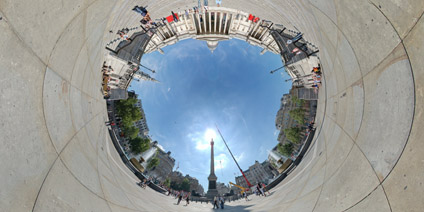