By the middle of the twentieth century, this area of Chicago was home to an established white working-class Catholic community. This changed dramatically in the post-World War II era. In South Chicago, for example, the white population decreased from 94.8 percent of the total in 1960 to only 27.5 percent by 1980. In 1953, when the Chicago Housing Authority attempted to integrate the all-white Trumbull Park homemade bombs exploded and the African-American families faced threats from their neighbors as they tried to shop, attend church, and go to work. The accompanying photograph shows Donald and Helen Howard, two of the African Americans who moved into Trumbull Park; they are putting plywood over the windows as protection from flying objects. (Chicago History Museum, ICHi-15102) 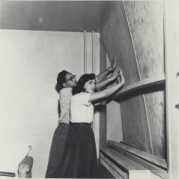 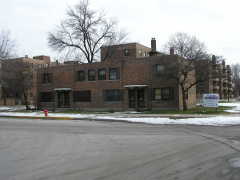