The Washburne Trade School both created opportunities for Chicago's workers, and helped to maintain the racial exclusivity of the city's craft unions. Opened in 1919 under a federal mandate to train trades workers, the Washburne Trade and Continuation School moved from the intersection of West 14th Street and Union Street to 31st Street and Kedzie in 1958. See: Washburne School "The Harvard of trade schools," provided general skills training and housed apprenticeship training programs jointly sponsored by unions, contractors, and the Chicago Board of Education. Like the Chicago Schools in general, Washburne has a controversial history. From the 1920s to the 1960s, Washburne was virtually all-white; African American youth attended Dunbar Vocational Center, which did not even have high school level programs until 1952. As late as 1960, only twenty-six of the school's 2,700 apprentices were black. During the larger movement in the 1960s to desegregate Chicago's schools, civil rights organizations pressured the Board of Education to integrate apprenticeship programs, and the percentage of African Americans, Latinos, and women in Washburne's programs increased through the 1970s and 1980s. At the same time, however, the number of apprenticeship programs decreased as unions pulled out of Washburne to open suburban training facilities. These unions included plumbers, ironworkers, cement masons and glaziers, and, in 1986, carpenters, pipe fitters and electricians. Painters and drywall finishers left in the mid-1990s. In 1965, 17 unions maintained programs at Washburne, but by 1978 there were only 8 unions at the school and 2 by the mid-1990s when the city merged Washburne with the City College system. Its major program now is the Culinary Institute. 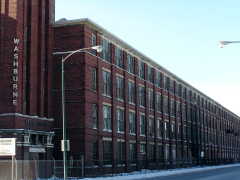