From January to March 1946, African Americans picketed White City Bowl and Roller Rink to force the owners to admit black patrons. White City, which was so-named because it was the last remaining facility left after the White City Amusement Park burned down in the late 1920s, had long excluded black customers. The owners claimed the facility was a private club with the right to exclusive membership. They failed to prove that they required dues or membership cards from its white patrons, and on March 16, 1946, the rink owners finally caved to a coalition of black organizations that included the Committee for Racial Equality (CORE), the Chicago Council Against Racial and Religious Discrimination, the National Association for the Advancement of Colored People, the National Alliance of Postal Employees, the United Auto Workers-CIO, the Chicago Urban League, the Dining Car Employees Union, the United Steel Workers-CIO, and the Socialist Workers Party. In 1947, the rink was turned over to new management, reopened as Park City Bowl, and opened its doors to customers of all races. 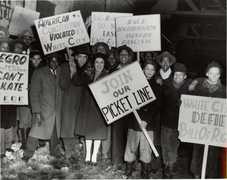