Hundreds, perhaps thousands, of women and girls have been and continue to be murdered in Juarez. A march has taken place to protest the lack of effort to stop the murders.

"The phenomenon of the female homicides in Ciudad Juárez, called in Spanish the feminicidios ("femicides") and las muertas de Juárez ("The dead women of Juárez"), involves the violent deaths of hundreds of women since 1993 in the northern Mexican city of Ciudad Juárez, Chihuahua, a border city across the Rio Grande from the U.S. city of El Paso, Texas. The estimated homicide toll is speculated by authorities to be about 400 [citation needed], but many local residents believe that the true count of los feminicidios stands at an estimated 5,000 victims. Most of the cases remained unsolved as of 2003[1], and are still unsolved today [citation needed]." 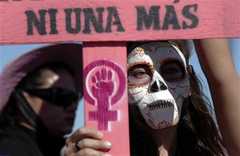