Workers Hall originated in the refusal of the Temperance Hall Finns to allow, as they had for several years, the Waukegan local of the Finnish Federation of the Socialist Party to use its facilities. Several months later, therefore, on November 15, 1908, the Finn socialists decided to build their own space, as their brethren throughout the USA and in Finland were doing. In 1910, they dedicated Workers Hall, the center of Finnish left-wing culture and politics in Waukegan for years to come.

We are fortunate to have a first-hand description in English of the building’s interior as well as what went on there. The stairs led to the main floor, which had numerous rooms that served various functions. On Thursday, the traditional day off for the Finnish women who worked as maids, dances were held. On Saturdays and Sundays, plays and other cultural programs went on. There was a gymnasium for athletic practices and contests and another large room for meeting and conferences. The performing arts, especially theater, anchored Worker Hall culture. Most was in Finnish, but Eva H. Erickson remembered that the young people put on several plays in English.

Many Finnish socialists in Waukegan switched their allegiance to communism after the Russian Revolution. The Waukegan membership in the Finnish Federation of the Workers Party in 1923 rivaled that of the Finnish Evangelical Lutheran Church. Throughout the 1920s, communists controlled Workers Hall. Erickson herself was a member of the Young Pioneers. She remembered that they “wore red handkerchief scarves and red beanies.”

Finnish socialists and communists fought over the control of Workers Hall for the rest of its existence. The Communists, by one report, wound up with control. In the early 1950s, the Antioch Baptist Church bought Workers Hall. It still holds services there. 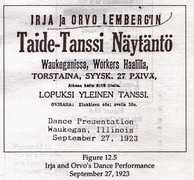 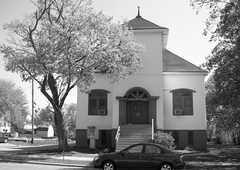 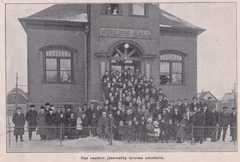