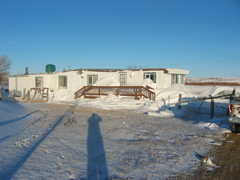 We bought this trailer in February 2001. Our first home purchase. We lived in it from April of 2001 until August 2004. Mary wrecked her motor cycle across the street in the gravel of the highway department.
(view on the map)
33. Jerome's Trailer
I know there's no trailer here now, but at one time, there was. It's moved a couple blocks north now.
(view on the map)
29. Roy School Trailer
We lived in a rental when we first moved to Roy after leaving Geyser in 1993. We only lived here for two months.
(view on the map)
32. Keefer Ranch
We lived on this ranch from October of 1993 until October of 2000, exactly seven years.
(view on the map)
35. Home in Fairview
We bought this house in Fairview in August of 2004. It's a good thing we did. It was scheduled for a sheriff's sale in September.
(view on the map)
5. Fairview Consolidated Schools
I started teaching here in August of 2004. I teach English and have taught German. I am also the technology coordinator. Through the EMTEC grant I have been trained as a Master Teacher teaching the Intel courses.
(view on the map)
24. Living with Dad
5101 Hackberry Ln
Sacramento, CA 95841,
After graduating in 1988, I decided to go live with my dad in Sacramento. I only lasted three months. The temperature was in the 100s most of July and August. I arrived on Father's Day and left right after Dad's birthday.
(view on the map)
17. Kafka Haus
Dreimarksteingasse
1190 Vienna, Austria,
My senior year I enrolled at the UofM for a study abroad program. For eleven weeks I lived in Vienna at the Kafka home at 17 Dreimarksteingasse in Vienna.
(view on the map)
2a. Study Abroad Classes
My study abroad program in 1984 was held in a room in one of these buildings. I'm not exactly sure where anymore, but it was in this neighborhood.
(view on the map)
6. German Immersion Workshop
Flathead Lake

Through the UofM and the Göthe Institute a class is held each August at Yellow Bay.
(view on the map)
5. Utah State University: Journalism
160 Old Main HL
Logan, UT, United States
(435) 797-1096
In August 1992 I attended a four day journalism course here. We had a team of only teachers. We called ourselves the Dream Team. We had fun building our mock yearbook. We named it "Basically Black and White" in honor of having no color in it and of our guest speaker who used the word basically at least 200 times during his keynote.
(view on the map)
8. Lesley University
29 Everett St
Cambridge, MA, USA
(617) 868-9600
Although I've never been to this state, I did earn my master's degree through Lesley. We met one weekend a month at Billings West High School in Billings, MT. It was an experience I'll cherish for the rest of my life.
2001-2004
(view on the map)
2. 18 Credits-never on campus!
University of Montana

I earned 18 quarter credits through the UofM without having to be on campus. 15 of those were during the Study Abroad program in Vienna, Austria. The other 3 were through a German Immersion workshop at Yellow Bay on Flathead Lake.
(view on the map)
6. UofM Distance Education
So, in 2004 I applied to teach a distance learning course. It was not the most successful experience. I don't know where it went wrong, but I think not requiring the students to have a vested interest may have had something to do with it.
(view on the map)
4. University of Montana-Western
Dillon, MT, USA
(406) 683-7175
My first distance learning course was taken through Western. I took a course to learn about bulletin board systems. Oh, that seems like a lifetime ago. It was probably 1990 or 1991.
(view on the map)
7. Michigan State
Michigan State University
S Harrison Rd, East Lansing, MI,
Integrating Technology into the Foreign Language Classroom: http://www.geocities.com/jenmdse/work/pedagog.html
(view on the map)
7. Rocky Boy High School 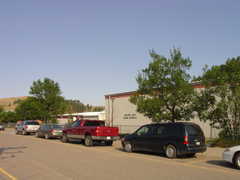 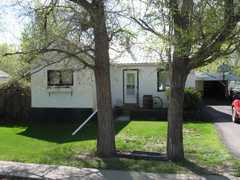