The Mayor of Casterbridge Map

, GB
Where Thomas Hardy l;ived from 1885 until his death in 1928. It was here that he wrote Tess of the d'Urbervilles, Jude the Obscure, and The Mayor of Casterbridge.
(view on the map)
Three Mariners' Inn
Fictional name for the former King of Prussia tavern.
(view on the map)
Annan
Annan, Dumfries & Galloway, GB
Place mentioned in the song of Donald Farfrae at the Three Mariners' Inn. Annan was originally a market town, which developed local industry using waterpower for grain milling and cotton spinning. In the 19th century the port of Annan forged links with Canada and the USA which led to the local shipbuilders graduating from building coastal brigs and schooners to building 1000-ton tea clippers.
(view on the map)
Roman Amphitheatre
Where Michael met Susan and Lucetta. Built by the Romans on the site of a hillfort called Maumbury Rings.
(view on the map)
Cannobie
Canonbie, Dumfries & Galloway, GB
Plave mentioned by Donald Farfgare in a song after a hoax meeting with Elizabeth. Canonbie was immortalised in a poem by Sir Walter Scott entitled Marmion. A famous section covers the exploits of young Lochinvar. Having stolen the hand of the bride of Netherby Hall, about three miles south of Canonbie, the dashing knight is chased through Canonbie, but makes good his escape.
(view on the map)
Ayr
Ayr, South Ayrshire, GB
Farfrae and Elizabeth danced to a tune by the name of "Miss M'Leod of Ayr."
(view on the map)
Durnover Church
Dorset, GB
Fictional name for St, George Church in Durnover, the fictional name for the real village of Fordington.
(view on the map)
Mai Dun 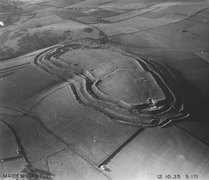 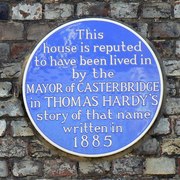 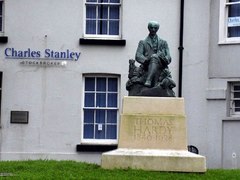