Locations associated with Brian Boru, 940-1014 AD.
(view on the map)
Béal Ború
New Street
Clare, Clare, IE
Brian Ború’s Fort, a large circular structure consisting of two built up rings. Archaeological excavations have shown that it was a simple homestead (a ring fort) which was occupied in the 10th & 11th centuries. This is where Brian Ború, his family and his large army of Dalcassian soldiers lived.
(view on the map)
Scattery Island

Clare, Clare, IE
Scattery Island Monastery was where King Ivar of Limerick was slain by Brian Boru, King of Munster at the time, in single combat in the year 978.
(view on the map)
Ballybough Bridge
Crosses the Tolka River, site of the Battle of Clontarf in 1014.
(view on the map)
Innisfallen Island

Kerry, Kerry, IE
Brian Boru spent time studying here at Innisfallen Abbey as a young boy under the watchful mentoring of Maelsuthain O’Carroll, who was possible one of the originators of the Annals.
(view on the map)
Clanmacnoise

Offaly, Offaly, IE
After the Vikings pillaged his home and killed his mother, Brian Boru was sent to the monastery of Clonmacnoise for safety and to be educated by the monks.
(view on the map)
Rock of Cashel
South Tipperary, Tipperary, IE
The prevailing Eóghanachta clan ruled the region for centuries from the stronghold here but lost possession to Brian Boru in 990. He ruled from his fortress of Cashel for another 20 years and was instrumental in keeping the Vikings at bay while bringing order and success to his country.
(view on the map)
Swords Abbey
Fingal, Dublin, IE
Where the bodies of Brian Boru and his son Murrough were brought on their way to their final resting place in Armagh. Just hours after their deaths they were carried to this site and laid out and waked by the monks.
(view on the map)
St. Patrick's Church
Cathedral Close
Armagh, BT61 7ED, GB
Where Brian Boru was buried.
(view on the map)
Bloody Acre
Finglas Road
Dublin City, Dublin, IE
Where Brian Boru was murdered by a Viking who came upon the ageing High King of Ireland praying in his tent, following the Battle of Clontarf in 1014.
(view on the map)
Carrigaholt Castle
Clare, Clare, IE
Tower house built around the end of the 15th century by the MacMahons, chiefs of the Corca Bascin Peninsula.
(view on the map)
O'Brien's Tower 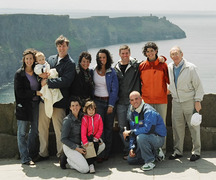 Tower built in 1835 on the Cliffs of Moher by Irish politician Cornelius O'Brien (1782-1857).
(view on the map)
Doneraile
Doneraile, Cork, IE
Where Michael O'Brien was born in 1815. Michael is the most distant know ancestor of Leo O'Brien, FTDNA kit No. 197598.
(view on the map)
Dromoland Castle
In 1551 Dromoland was listed in the will of Murrough O'Brien. He was first Tanist and in 1543 he had been granted the title of first Earl of Thomond by Henry VIII. In 1962, Donough O'Brien, the sixteenth Baron Inchiquin, sold Dromoland Castle and three hundred and fifty acres because of difficult financial circumstances. He built Thomond House on a hill overlooking Dromoland. He moved in to this Georgian style house in 1965 but died in 1968. It is now occupied by the 18th Baron Inchiquin.