Brought to you by www.theparanormalsite.com
(view on the map)
Abbie Gardner Cabin
Spirits, Ghost of Abbie Gardner and Spirits that may follow you home.

Small memorial marker. Bonnie and Clyde are said to haunt this location and at night you can hear the sounds of gunfire.
http://theparanormalsite.com/paranormal-locations-by-state/louisiana/
(view on the map)
International Cryptozoology Museum
4 Thompson's Point Road
Suite 106
Portland, ME Portland, ME 04102.
Museum of Cryptids www.cryptozoologymuseum.com
(view on the map)
UFO Watchtower
Camp ground and visitor center in a high sighting area. UFO conferences are held here too.
http://www.ufowatchtower.com/
(view on the map)
Huggin' Molly

Abbeville, AL 36310, US
A 7 foot tall specter that grabs children who are out after dark, hugs them tight and screams in their ear. http://theparanormalsite.com/paranormal-encyclopedia/huggin-molly/
(view on the map)
La Carafe

813 Congress Ave
Houston, TX 77002, US
Said to be the oldest bar in Houston, guests who visit here have reported seeing the ghost of a large African American man roaming the upstairs. Many have heard heavy footsteps and dragging sounds throughout the building. The great thing is this old bar is still open today! Stop in, have a drink and keep your eyes and ears open!
(view on the map)
Presidio La Bahia

217 US-183
Goliad, TX 77963, US
Founded in 1721, this Spanish fort was the site of some deadly conflicts. With deadly conflicts come hauntings. It is said that the area is permeated with the spirits of soldiers who died here. Witnesses have seen apparitions of these solders, and some have heard the scared and angry cries of pain of these spirits at night.
(view on the map)
Elks Lodge 537 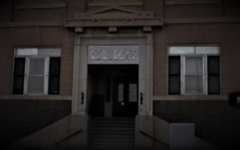 619 Pleasant St
Miles City, MT 59301, US
During prohibition, this lodge was a pretty wild place. Bonnie and Clyde even played cards here. In 1936 there was a suicide and from then on, the spirit of a woman dressed in a long dress has been seen in the hallways of the building. Some other recorded paranormal events at this location include an image of a spirit exiting a bathroom, and the sounds of a woman moaning and screaming which was captured by Montana Paranormal Research Society.
(view on the map)
Copper King Mansion

219 W Granite St
Butte, MT 59701, US
Believed to be haunted by the original owner of the location, William Andrews Clark. Activity at this location include sightings of strange shadows, hot and cold spots that appear randomly throughout the house, but perhaps most interestingly, there are reports of guests being overwhelmed by a feeling of being welcome when they enter the home. There also have been sightings of a light colored fog that is mainly seen in the first floor hallway and in the basement. The mansion is now a Bed and Breakfast, so you paranormal investigators can rent a room and may have a shot at recording some activity.
(view on the map)
Pope Lick
A satyr looking creature is said to roam the Pope Lick Train Trestle luring victims to their deaths.
(view on the map)
Okie Pinokie Woods 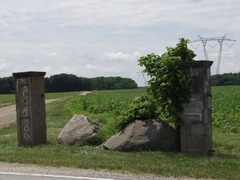 The Okie Pinokie Woods. Investigators have recorded screams, voices and if you whistle, it is said a whistle will come back from deep in the woods.
(view on the map)
The Dake House 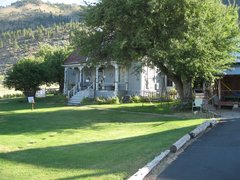