Locations in the life of Anton Chekhov and his 5 short novels. 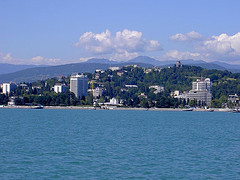 gorod Sochi, Krasnodarskiy kray, RU
Resort on the Black Sea near the Northern Caucasus Mountains, reminiscent of where The Duel took place. Site of the 2014 Winter Olympics.