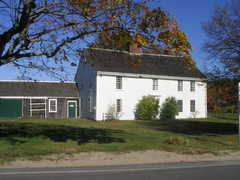 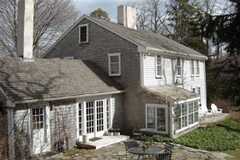 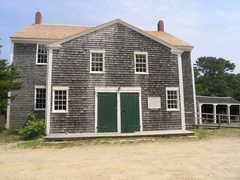 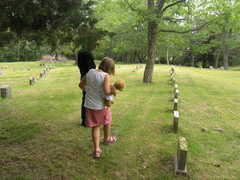 Please keep in mind that the early Quakers did not believe in headstones.
(view on the map)
Cataumet Cemetery
Oldest cemetery in what is now Bourne, Mass. Oldest dated gravestone is 1768.

transcriptions of tombstones available at: http://www.findagrave.com/cgi-bin/fg.cgi?page=cr&CRid=90845&CScn=Cataumet+Cemetery&CScntry=4&CSst=21& 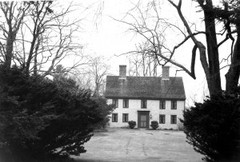 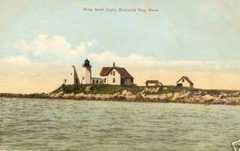 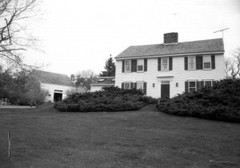 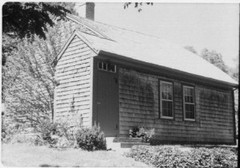 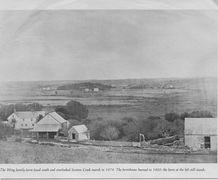 Site of John Wing home, son of Stephen. Destroyed in a fire in 1900. See http://www.carletonshores.com/history/history.htm
(view on the map)
Lemuel Pope Home (1794) 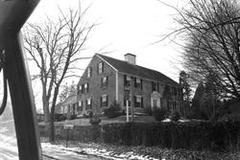 14/16 Grove Street
Sandwich, MA 02563
The "Orchard Home" [at one time thought to possibly be the original home of the Wing family] was moved over here and attached to this building.

David Wheelock has examined this building and concluded it cannot chronologically have been built early enough to have been the original Wing homestead.
(view on the map)
Site of Samuel Wing's mill (17??)
Originally a cotton and woolen yarn mill at the upper Mill Dam. Later converted to a tack factory.
(view on the map)
Sandwich Public Library
142 Main St.
Sandwich, MA 02563
(508) 888-0625
Library and Town Archives
(view on the map)
Nathaniel Wing Home (c1695)
291 Barlows Landing Road
Bourne, Massachusetts 02559
Location of the "Natty" Wing Home. Built for (by?) Nathaniel Wing, son of Stephen circa 1695. It is located at 291 Barlows Landing Road.

According to an official inventory of Bourne Historic Properties (http://www.townofbourne.com/LinkClick.aspx?fileticket=Wh193d9iJZU%3d&tabid=177&mid=795 ID # 35)
this is one of only three buildings still standing in Bourne that date from the 17th century.
(view on the map)
Matthew Wing neighborhood
This is ROUGHLY the area where Matthew Wing and his descendants settled.

This house was still standing (and had residents) in 1969 (when it was advertised for sale in the Feb 1969 Yankee magazine), but had collapsed soon afterward.

Home sometimes called the Oliver Wing House. Also called "The Enclosure" in some deeds as it was enclosed in the middle of the pine trees.
(view on the map)
Pocasset Cemetery
Oldest Gravestone (Ederance Robbins) dated SEP 1835.
see: pocassetcemetery.org
(view on the map)
Lester Wing House (c1905)
1019 Shore Rd
Pocasset, MA 02559, US
1019 Shore Road, Pocasset
Lester was living with his mother, Delia in the 1900 Census at her house (Bullet #14). He married Mabel H. Gibbs in 1902. He likely built his house between this date of marriage & 1908 when his mother sold his father's farm.
(view on the map)
Bay Breeze (c1807)
Home of Alvin Wing (1784-1862) son of Lemuel.
If Alvin was the original owner of the house, then it is likely it was built around the time he married his first wife, Thankful Swift, in NOV 1807.
(view on the map)
Stephen Bachiler's Church (and presumably his homestead)
Church founded by Rev. Stephen Bachiler. The Wings lived with their grandfather near this site until they moved to Sandwich in 1637.
(view on the map)
Wing Memorial Family History Center
Museum of the WFA. Holds the Simon Wing photography collection, and other historic Wing artefacts