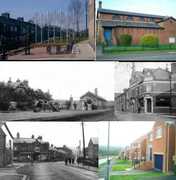 Ushaw Moor is an ex-coal mining village three miles west of the Historic City of Durham and a short distance to the South of Bearpark.

Parish registers suggests that the settlement dates to a least the sixteenth century. The village existed in a largely agricultural state, with a windmill being its one feature up till the nineteenth century.

Ushaw College is located to the north of the village a Roman Catholic seminary and one of the constituent colleges of the University of Durham. It moved to Ushaw Moor in 1808, on the initiative of Bishop Gibson. It was originally founded at Douai in France in 1568.
(view on the map)
Station House Ushaw Moor 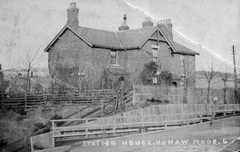 he Ushaw Moor Branch of New Brancepeth Co-operative Store in Durham Road with at least 18 employees.
(view on the map)
Samya Gifts and Collectibles

A unique collection of superb gifts and collectibles for that someone special in your life.

A fine body of troops. We believe the photograph was taken in 1940. Do you know who any of the soldiers may have been? Were they celebrating an important event with this photo? Were they going somewhere? Are they regular troops or The Home Guard?

The large building in the background was used as a cinema. The wooden addition was the projection room.
(view on the map)
Ushaw Moor Colliery

The row of derelict houses in the photo backed directly onto the Pit Yard. The Walton family lived in this terrace and Tom and Billy Walton both worked at John Bells farm which was situated next to the Institute on the Esh Winning road. This farm has recently been converted into living accommodation. I think that Albert Whitfield lived in the house nearest Ushaw Moor. Entry to the Pit Yard could be gained round the gable end of the terrace (Esh Winning end) and also through the Pit Yard entrance which was situated about fifty yards away in the direction of Ushaw Moor. There was a house/shop directly opposite the Pit Yard gates. I can never remember it being open as a shop and it is now a house only. There was a derelict electricity sub station when I was a lad situated at the bottom left hand side of the wood in the distance. This was a narrow brick built building three storeys high. We used to climb a steel ladder attached to the right front side of the building. The fascination about the building for me was that the concrete ceilings of the building were papered with newspapers printed during the First World War and I used to spend hours straining my eyes reading those newspapers. In the field to the left of the wood was a conker tree and we would spend hours throwing stones and bits of wood into the branches of the tree for a couple of conkers. I wonder if kids still seek conkers there? I cannot remember the name of this derelict terrace. Perhaps someone could send this information in.
(view on the map)
Ushaw Moor Miners Banner

Taken on 17th July 1960 being the last time the banner was flown with Ushaw Moor on it. The pit closed a month later and the banner went to Kimblesworth Colliery and attended the 1965 Durham Miners Gala with the name repainted to read Kimblesworth
(view on the map)
Ushaw Moor Aged Miners Homes

No demolished and new housing built.
(view on the map)
Ushaw Moor Baptist Church in the early 1900's.

Ushaw Moor Baptist Church in the early 1900's.
(view on the map)
St. Josephs Roman Catholic Church was built in 1909

The first St. Josephs Roman Catholic Church was built in 1909. This picture show the ornate embelishment created inside a humble church.
(view on the map)
Broughs store Station Road

Broughs store at the bottom of Station Road operated a delivery service which covered a large area of the Deerness Valley. They created employment for at least 22 people in 1914.
(view on the map)
Station Hotel

"I was filled with memories when I saw the photograph of Oakridge Road. This photograph must have been taken in the early 50s. We kids could enjoy playing in the street in those days, this can be seen by the one motor vehicle seen in the photograph, motor vehicles were very few and far between. The white building seen in the distance was a small branch of the New Brancepeth Co-operatine Society. It was very handy for people living in the area otherwise it was a walk down the street to the shops there. It consisted of one large room with counter at the Bracken Court end of the building. Billy Calvert worked in the shop. The Co-op never extended the shop and it closed after a few years. Billy Calvert lived along Deerness or Joyce Terrace. Oakridge Road was exceptionally well laid out with lawns and it was a great change for people moving into the new houses from the colliery rows at Ushaw Moor Colliery or New Brancepeth. Motor vehicles parked in the area have spoilt the original lay out. The architect who designed Oakridge Road was named Fred Hedley. Fred was the architect for the local council - Brandon & Byshottles Rural District Council. Byshottles is a great word but I have never known the meaning of the word."

Comments: This is the first time I have seen this photograph and it was nice to see some old friends. The lad 3rd from the left in the back row is Ernie Ellis. He was a good friend and he lived at No. 1 Whitehouse Court with his brother Billy and sister Elsie. He was a good footballer. I think the lad on the extreme left in the middle row is Chris Hanson. Another good lad, Chris lived on the block at the bottom of Station Road between the Station Hotel and Neeshams Bottling Plant. Chris had brothers named Gordon, Tom and Sid and a sister named Margaret, there may have been more in the family but I cannot remember them. Harry Kirby is the la d third from the left in the middle row. I knocked around with Harry for a few years, the family lived behind the Bush and then moved to Holly Park (?) near Oakridge Road. Harry had a brother named Robert and a younger sister named Margaret. When the pits began to close the Kirby family moved to the Midlands for work in the pits. I think the lad at the extreme left in the back row is called Seed. The family lived in Hall Avenue in the village. Happy Days.

Ushaw Moor station in 1890. Before the footbridge was erected. Access was gained to the platform via an underpass and stairway.
(view on the map)
Miners Gala Day 1961

The was taken on the morning of Miners Gala Day 1961. The locomotive 77002 came from West Auckland shed and was one of the two locos that hauled the last train over Stainmore on 20th January 1962. It had taken the empty coaching stock to the colliery sidings at Flass Junction to run round its train and it would be sitting at Ushaw Moor to load the passengers for about 20 mins since the band and banner had not yet arrived.
(view on the map)
April66 Ushaw Moor Viaduct The line opened for goods on 1.1.1858 from Deerness Valley Junction on the Durham to Bishop Auckland line to a point near the junction of The Stanley Incline and the line to East Hedley Hope Colliery. A passenger service wasn't introduced until 1.11.1877 when a single platform terminus was built part way along the line at Esh Winning, the station was named Waterhouses; passenger trains never went beyond Waterhouses. A second station was added at Ushaw Moor on 1.9.1884.
(view on the map)
Ushaw Moor Signal Colliery Box

Ushaw Moor Colliery Junction, showing the signal box which closed circa 1928. After its closure, it was reduced to ground frame status and the junction was operated by the train staff. The structure in the background was the original signal box, it was replaced circa 1904 but seems to have been retained for platelayer's use.
(view on the map)
Timber Viaduct

The Deerness Valley branch had two distinctive timber viaducts, which were among the very last of their type on any passenger-carrying line anywhere in Britain. One of the viaducts was near Ushaw Moor Colliery Junction, some 2.5 miles along the branch from the junction with the main line. Shortly before the branch passenger services were withdrawn in 1951, G5 0-4-4T No.67298 crosses the viaduct on its way to Waterhouses with what is probably the school train.
(view on the map)
Ornamental Trees 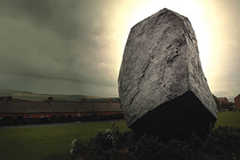 The Roundy' was commissioned as a memorial to the mining industry by residents group Ushaw Moor First which campaigns for improvements for the City of Durham village. Traditionally a Roundy was a miner's term for a large lump of coal, the Ushaw Moor Roundy stands at over four meters high and weighs over 14 tons!
(view on the map)
College Woods
(view on the map)
Ushaw Moor Colliery Chimney in 1932

Two Dutchmen were brought to Ushaw Moor colliery to fell this chimney in 1932. The memorial hall can be seen on the horizon.
(view on the map)
Ushaw Moor Cricket Club, Mid Durham Senior League, 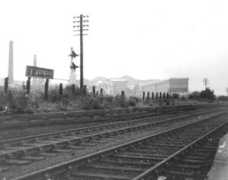 Bearpark station was built in 1883 but called Aldin Grange but was renamed to Bearpark in 1927.
(view on the map)
Ushaw Moor Sure Start
Durham Road, Ushaw Moor 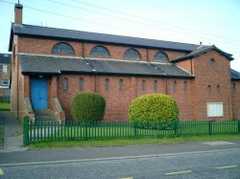 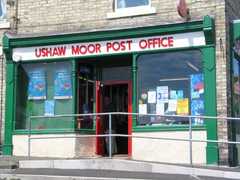 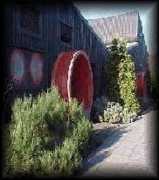 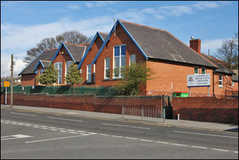